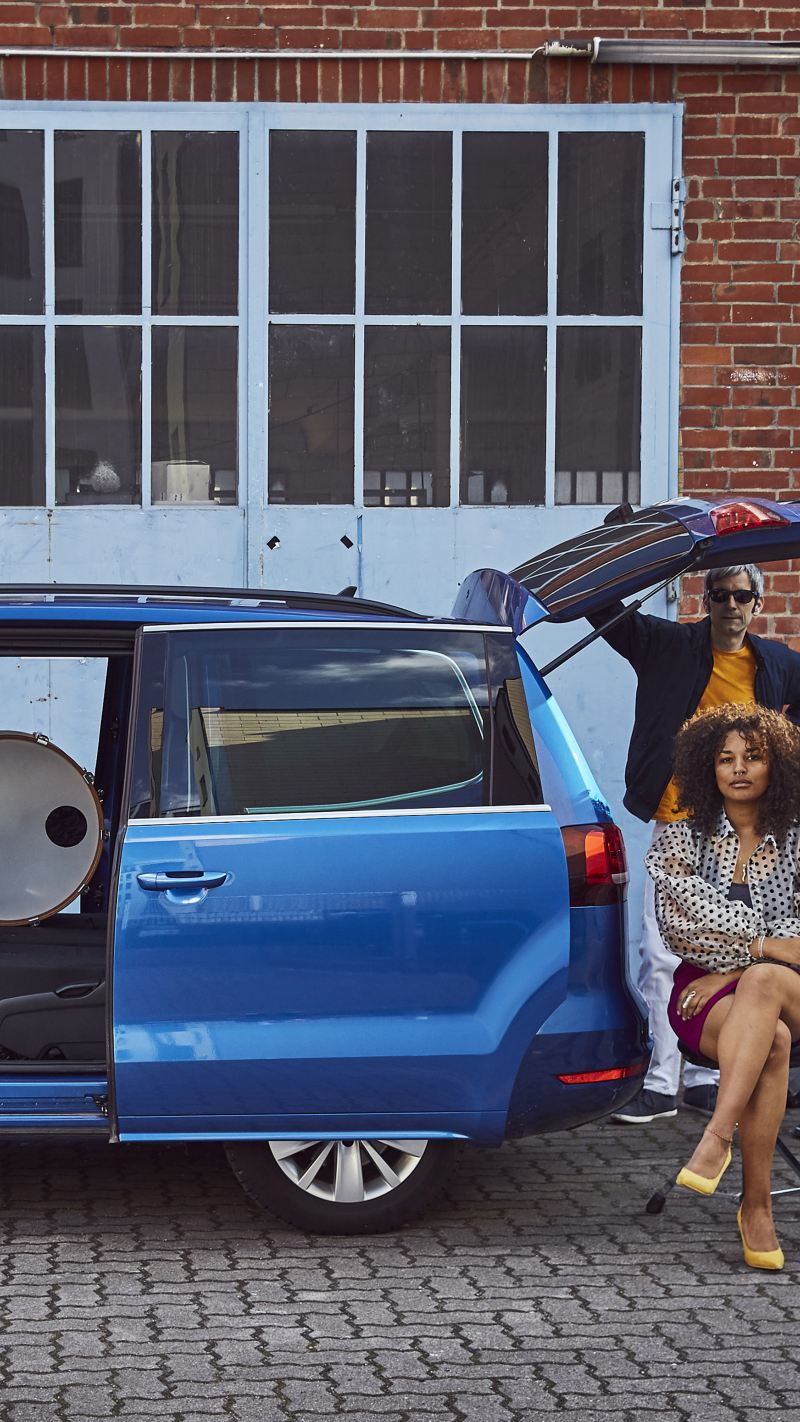 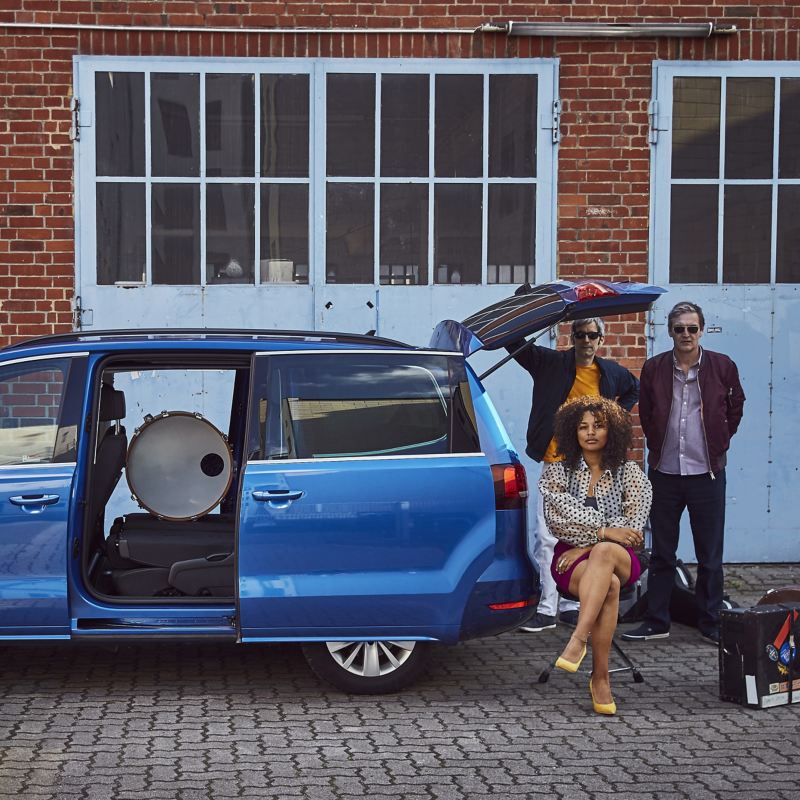 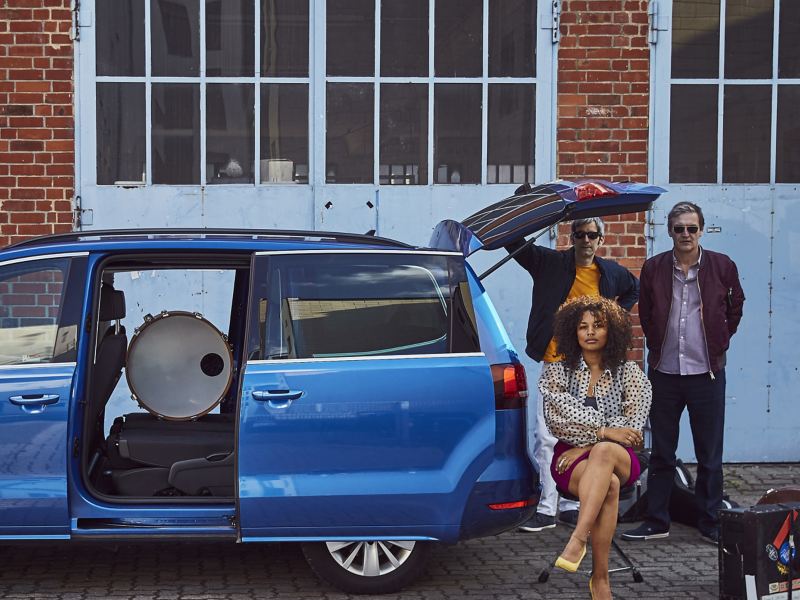 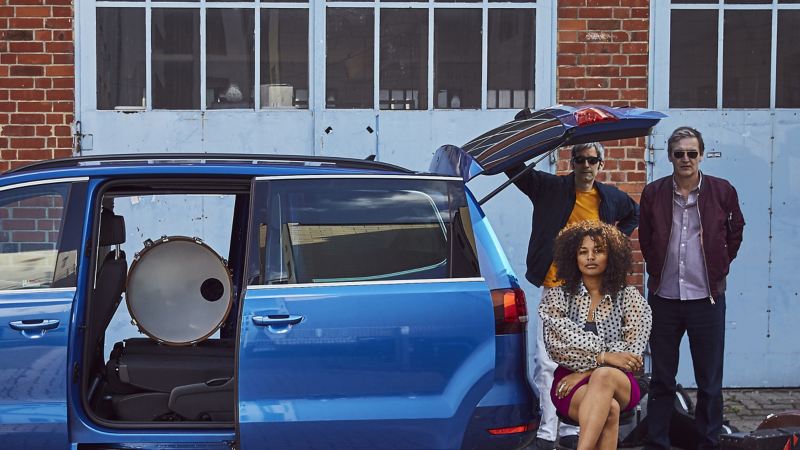 Tour de jazz – to the rhythm of the night

Tour de jazz – to the rhythm of the night

Three Hamburg-based musicians want to perform a live concert in the lively Sternschanze district. But how do you get the band and their instruments conveniently and securely from the rehearsal room to the trendy neighbourhood? Sharan to the rescue. It offers ample space and even proves itself to be a mobile concert hall over the course of the evening.

Three Hamburg-based musicians want to perform a live concert in the lively Sternschanze district. But how do you get the band and their instruments conveniently and securely from the rehearsal room to the trendy neighbourhood? Sharan to the rescue. It offers ample space and even proves itself to be a mobile concert hall over the course of the evening.

It’s fairly easy to find the rehearsal room. As I enter the rear courtyard full of nooks and crannies and check around me for a moment, I am instantly able to get my bearings with the rhythmic sound from the basement. I have to head over there. Just keep following the bass drum and I’ve found the way in. The rehearsal room is located at the edge of Hamburg’s Sternschanze district in a small, quiet side street. The red brick that northern-German builders so enjoy using glows in the setting sun. In the rear courtyard, there is a dance school, the obligatory car repair shop and a photo studio, where a fashion shoot is currently taking place. It’s pretty clear that I’m in the trendy Sternschanze district, where Hamburg’s creatives live, work and party. Of course, the entrance has no doorbell. And with the loud drumming, there isn’t any point trying to get the drummer on the phone. So I knock several times on the cellar window. During a brief break in playing, he hears me and opens the door. Christoph Kähler isn’t very easily separated from his instrument. He got his first drum kit as a child, diligently took lessons for years and has remained true to the drums to this day. During this time, he has been earning a living as a studio or live musician for bands like Fettes Brot and Die Fantastischen Vier, or working with artists such as Nneka and Wolf Mahn. He is currently a drummer at the Altonaer Theater for the stage production of the film Absolute Giganten.

We wait chatting in front of the door in the late afternoon sun for another two musicians that Christoph has invited.

Fabio Papais, a former band member with Christoph who plays guitar and electric bass, and singer Jamie Watson should be arriving shortly. The trio have arranged to jam together and to play whatever they feel like on the spur of the moment. The three of them see these kinds of evenings as creative balance for career musicians. Those who play music professionally and make their living that way find it pleasant and relaxing to play songs that don’t otherwise appear in their repertoire. Just as competitive athletes will practise a recreational sport. But the jam session won’t be taking place in the rehearsal room. There will therefore be a change of location.

Travelling to the venue with instruments is always a logistical challenge for bands. Once everyone is together, attention therefore immediately turns to the transport preparations. Christoph’s drum kit is the first thing that needs loading. The other equipment, Fabio’s guitar and electric bass, as well as Jamie’s stage clothes, are almost odds and ends by comparison. I’m at a loss as to how the band are going to get anywhere with the material currently lying in the street. I also understand better now why pop bands always travel with a huge tour bus and several lorries for their equipment. But Christoph reassures his fellow musicians; he has parked the solution to their logistical problem around the corner – a Sharan Comfortline.

For a drummer – and one with children, too – a private car has to be very spacious so that everything fits. The seats are thus quickly folded down – which presents no problem thanks to the practical EasyFold fold-down function – and loading can begin.

A long night and short journeys.

The trio selected their favourite spot in Hamburg’s Sternschanze district as their venue. It’s a converted trailer where concerts take place at the weekend. The perfect location for the gig because there’s a large car park next door. It could hardly be any more convenient.

A near-perfect spring evening. Playing music with friends for friends – you couldn’t ask for any more than that.
Christoph Kähler

Jazz is alive and well

Hamburg jazz club Birdland represents a jazz revival in the Hanseatic city. Steeped in tradition, the location has become a real success story under new management. In addition, two internationally renowned jazz festivals have even been established in Hamburg in the past couple of years. The best known of these is Elbjazz. The festival, which always takes place at the end of May, is now a must for lovers of the genre. Many concerts take place outdoors, some are on boats in the harbour, there are even performances at the Elbphilharmonie.

The second festival is Überjazz, which takes place in November. This is refreshingly and innovatively curated and there is exciting new music to listen to each year. The genre boundaries between traditional jazz and modern varieties are delicately and expertly blurred at the Überjazz festival.

It’s pretty relaxed getting here during the week – unlike at the weekends, when partygoers flood the Schanze. Unloading is quick and all three are able to get their instruments and bags comfortably through the open sliding doors of the Sharan. Christoph is therefore finished with putting his drum kit together even faster than expected. Now just to quickly lock the electric sliding doors and head onto the small stage. The trio have invited a few friends along for their jam session. Without an audience – and even if it’s just a handful – playing live is nowhere near as much fun. The converted trailer, which even has a little bar inside, fits 25 people at most and the party venue fills quickly. The atmosphere is informal and the trio just start playing casually. A protracted introduction is unnecessary. Jamie’s voice instantly captivates the room. A challenging mix of jazz, soul and funk is being played. In the process, the band adeptly mixes unknown songs with their own versions of Motown classics and blue-note hits. The audience loves it. They party and dance.

The evening slowly draws to a close. Jamie takes her leave on stage while Fabio and Christoph play the final bars. The last note fades out; the friends have another drink, offer their gratitude for the attention and affection of the audience, and head off into the night. Jamie has decided at the last minute to stay in “the Schanze” and Fabio is being picked up by his girlfriend.

Christoph packs the last of the bags into the Sharan. “So, should I drop you off at home?” We climb in and Christoph plays me some music for his new solo album. The sound is really good, expansive and dynamic. My expression speaks volumes, because Christoph asks: “It sounds great, right?” In fact, a sound as precise as that is rare and it is expressed especially well in the van – almost like in a concert hall. It comes as no surprise, because an optional Dynaudio Contour sound system is installed – the total output of the eight amplifiers is more than 300 watts. The best recording studios in the world use loudspeakers by Danish manufacturer Dynaudio. As I later find out, its sound engineers were involved in the development of the vehicle and tailored the system to the acoustic conditions of the Sharan.

It makes no difference that we arrived at our destination a while ago. We park up in front of the house and listen to another couple of songs. As I bid farewell to Christoph, we promise each other that we won’t leave it as long until we next see one another. Christoph turns around in the driveway and the Sharan in jazz-cool Atlantic metallic blue disappears into the night. The music from the open window can be heard for a little while longer until only the familiar background noise of the city can be heard.