Visions of now:
Via Grafik

Visions of now:
Via Grafik

Building a digital work of art.

„Although you don’t feel any physical resistance, it directly creates a visual result", says Leo in amazement. He is a graphic artist and part of Via Grafik, a design collective and design bureau with its origins in graffiti art. He encountered virtual reality for the first time and tried out a 3D software for us, which allows him to paint and draw in virtual space. The final result: a three-dimensional, digital artwork that he created in the space around the ID. concept car.

Due to his curly hair, the delicate features and his light smile, at first glance, one wouldn’t believe that Leo once cranked up the whole graffiti scene. Yet he did. When he recounts how all that started, he begins in the schoolyard: „Well, it was a subcultural context - everybody was skateboarding and my friends started writing their names on walls and you just tried to imitate, to emulate." With the spray can in his hands, he learns to trust his intuition and understands that his gestures are able to compose a visually strong result.

His style changes and evolves, influenced by various genres. "I want my work to trigger something at first glance. It needs to leave an impression!“ The digital sculpture, which he designed in our studio puts the ID. concept car into an unusual setting. But Leo also wants to keep the people interested in the long run and make them look at the details of his art.

He picks up quickly how to use the 3D controllers, which in combination with the VR glasses work like multi-function brushes and is fascinated by the intuitive handling. „Every slight click is followed by a direct visual effect," says Leo. He explains that this feature makes him work fast and fearless, as he can also undo each step easily. "I always react to what's already there and that's how it all comes into being – piece by piece. I have no concrete vision of how it will look like later.“ Virtual Reality seems to be his schoolyard for the moment. 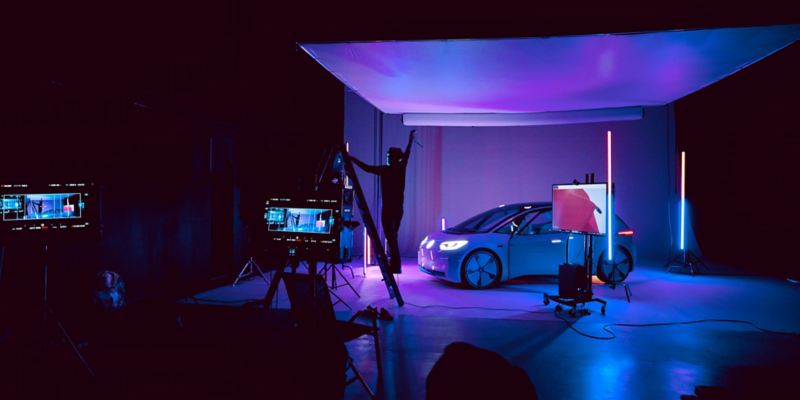 „Although you don’t feel any physical resistance, it directly creates a visual result." – Leo Volland

„Although you don’t feel any physical resistance, it directly creates a visual result." – Leo Volland

Although Leo is able to handle the VR glasses and controllers safely, he seems uncertain about how to name all of this. What is it, that he is actually doing there? Since it's 3D, it can’t be considered painting. Creating somehow sounds megalomaniac. Finally, he calls it building. We had the impression that Leo is feeling quite comfortable in his new chosen schoolyard. The intuitive concept of the software allowed him to bring in his graffiti experience and get started straight away. How quickly Leo was able to acquire this new technology is impressive. „This makes you sense the potential that lies behind it“, he says. A similarly intuitive interaction with smart technology he can also well imagine in the car. "Hundreds of buttons and hidden features are usually so annoying“, Leo groans.

Instead, voice control and a simple, self-explanatory design could ensure simple handling. When observing Leo, it becomes apparent that the use of playfully and quickly learnable devices can be quite delighting. To give rise to huge shapes in free space, just like that, does not only seem to be a lot of fun but also looks pretty impressive. Leo nods: "Yes, you feel pretty powerful in terms of space." A few minutes later, he asks the team for a ladder. The testing has made him megalomaniac after all: his arms do not reach high enough to finish the threedimensional digital artwork. 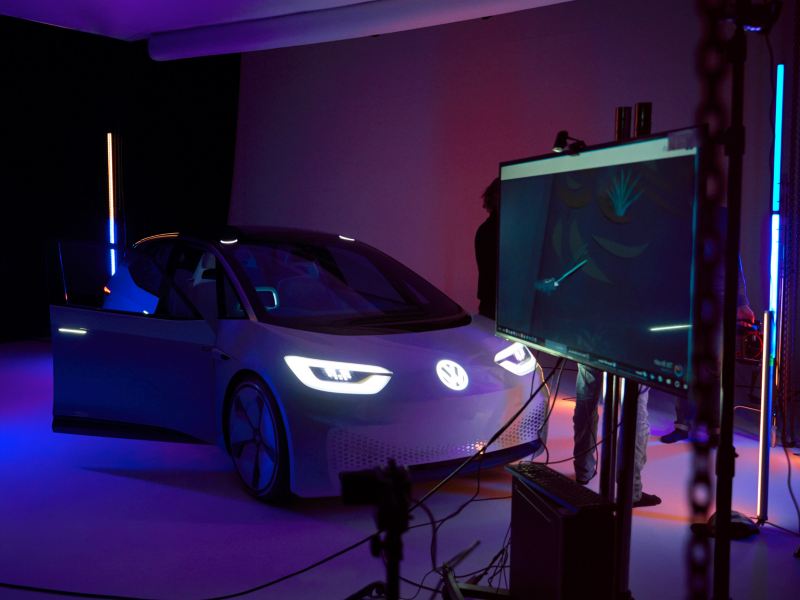 I always react to what's already there and that's how it all comes into being – piece by piece. I have no concrete vision of how it will look like later.
Leo Volland

Leo Volland grew up in Heilbronn, has lived in Berlin for many years and since the late 90s, he’s an established part of the graffiti and street art scene. Together with with friends he founded the art and design collective Via Grafik. Leo has a very experimental approach to his art, from installations to unseen ways of using colors, which has brought him nationwide recognition and his art not only being exhibited in the streets, but in art galleries and exhibitions.